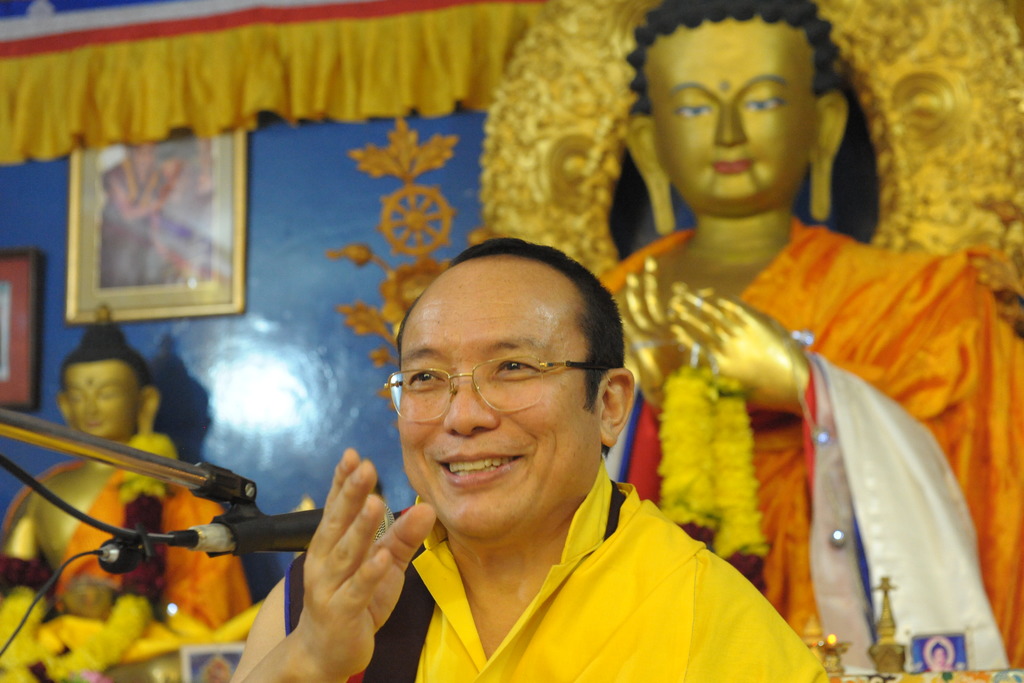 On Saturday 9th of January Tushita hosted His Eminence Tai Situ Rinpoche. Rinpoche has been teaching regularly at Tushita for almost three decades, but this was a talk with a difference. The title chosen by Rinpoche himself-“Pros and Cons of the Twenty-first Century”- indicated that it was not going to be a straightforward dharma discourse.

Rinpoche had painstakingly gathered facts and figures with the help of his students to show very clearly the difference between the world of January 1st 1900 and that of January 1st 2016, with an emphasis on the changes since the year 2000 and 2016. So we heard not only of population increase, desertification, increase in ocean extent, decrease in Polar ice and the world’s precious forests, but also statistics relating to the world religions.

Rinpoche was concerned that the numbers of Buddhists was said to have gone up dramatically. He said this was not such a good thing because it was not possible that so many new people would actually understand what Buddhism was really about. Their lack of knowledge would not prove useful. He hoped the statistics were faulty in this regard.

Rinpoche felt that we had an information overload in our brave new twenty-first century world of gadgets, but there was a dangerous lack of wisdom and a loss of meaning, especially in young people’s lives. He said that whereas in his own case his life purpose was always clear-he was responsible for maintaining his precious lineage out of gratitude to his Gurus and predecessors as well as being a servant of others;countless people have no beneficial purpose to their lives and this leaves them discontented and prone to unwholesomeness.

As well as some time spent fielding questions, in which at one point he said how difficult it is for some to give up repetitive non-virtuous actions, whereas it is very easy for others due to karma, Rinpoche also reminded us that we were Buddhas in essence and that karma operated only on the level of relative truth. If we progress even 1% in this life, then that is good enough.

We were also fortunate to have some intimate observations from Rinpoche on his childhood in Darjeeling at a time when he lived in difficult circumstances in a poor part of town. This was partly given to reveal how cheap many items were back then compared to now!

Rinpoche’s inner joy and humour are always revealed during his talks at Tushita and this was no exception. We were left with the satisfaction that comes from hearing a true master whose wisdom and compassion is carried so naturally and lightly, but which oozes out of all his pores and brings delight to his audience.

We are so grateful to Rinpoche for accepting to come and to everybody who contributed to making this a memorable event.